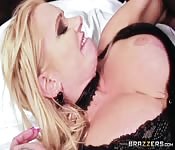 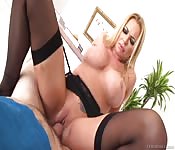 She's a freaky slut with some huge tits.

Blast from the past Briana Banks fucks